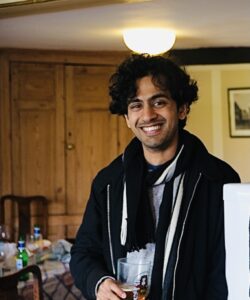 The Mercator Fellow of the SFB of the 2nd period is Dhruv Ranganathan. His research focuses
on combinatorial algebraic geometry, in particular log geometry and tropical geometry. A special focus of his research is on moduli spaces and enumerative geometry.

Dhruv Ranganathan is a Lecturer at the University of Cambridge and a Fellow and St. John’s College. Before, he was a Postdoc at the MIT and a Member of the Institute of Advances Study in Princeton. He completed his Ph. D. in 2016 under the supervision of Sam Payne in Yale. His current webpage can be found here.

The Mercator Fellow of the SFB is Olivier Dudas. His research focuses on modular representation theory of finite reductive groups, with a particular interest in the geometric version of Broué’s abelian defect group conjecture.

Olivier Dudas is currently a Chargé de Recherches (Research Fellow) at the CNRS, working at the Université Paris Diderot – Paris 7. Before that he was an EPSRC Postdoc in Oxford, as well as a Junior Research Fellow of Magdalen College, Oxford. He completed his Ph.D. in 2010 under the supervision of Cédric Bonnafé in Besançon. His current webpage can be found here.

Olivier Dudas spends research visits at the main locations of the TRR on a regular basis.